Hey Peeps!
We know the site is lacking a little in blog posts/content but we're working on it, I promise.
Behold! Our new banner.  Hopefully in the next week we'll have completed a new background for the site as well.
Whatcha think?   :)
Posted by Painting Munky at 8:22 PM 12 comments:

Painting Munky has Entered the Fray 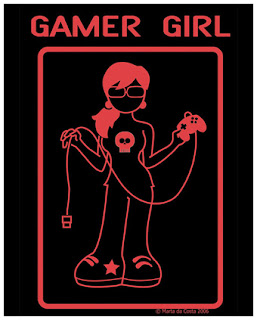 Today Kotaku posted an article by 17 year old Jessica Cernadas from NPR's Radio Rookies regarding the lack of respect female (video) gamers seem to receive.  Kudos to you, Jessica, on actually putting yourself out there and getting a news radio article published!
Now, I do recognize that some of the issues brought up in this interview are real and DO happen, I have to disagree that they happen as often as this particular piece seemed to indicate.
Maybe I just blocked when it happened to me.  Maybe I am lucky and just haven’t been exposed to it as much as other girls.  Maybe I just don’t see gender when it comes to games.  Or I don’t care because I realize that it’s all a part of the genre.
I think in articles like this, the lack of respect women are receiving is being sensationalized, and is probably not nearly as big an issue as it has been made to seem.  Or at least not as big of an issue as it USED to be when there were even fewer female players.
It seems common knowledge that there is a higher percentage of male gamers then female and that the gap is closing quickly, but how many times have you been online and heard guys teasing, provoking, and calling each other derogatory things?  In my experience I remember more occasions of that happening than being belittled, flirted with or prompted to show my tits.  Even when it has happens it just fuels my desire to completely annihilate my adversary more and it’s just the same as teasing, provoking, and calling me derogatory things.
It doesn’t seem like it would be particularly effective to hear my feminine voice over online play telling a guy that his mom loves playing with my balls nor him telling me he’s going to punch me in the cock so hard my junk’s going to turn into a vagina.  When you are trying to beat someone competitively, you use the ammo that you think will be most likely to throw them off their game.
This is the same shit that some girls do to each other in competitive settings just maybe not as publicly or loudly as in a gaming setting.
No one pretends that the gaming industry is a representation of gender, racial, sexual or religious equality.  Or at least no one should.  It’s a worthy goal.  But even just general society hasn’t reached the point of pure equality in any of those areas, as great as some of the steps taken to achieve those goals have been made.
Just for another point of view, Extra Credits on the Escapist has an interesting video on this topic.
I know I can’t cover all the facets of this subject and there are definitely things I haven’t even thought of.  What do you think?  Is this a big deal?  Are you guys just throwing tan bark at us in the playground for our attention?  Are girls propagating a double standard?  Or is it true aggressive disrespect?
Posted by Painting Munky at 11:57 PM 7 comments:

It's been many years since I would consider myself a true resident of Gameland. I've found myself slipping a little more into the real world with each passing month. Oh sure, I had that crazily intense affair with Diablo 2 a year or so ago... and there was those minor flings with WoW and Dawn of War... but it's been quite some time since I've been in a true relationship with gaming.

I remember those days so fondly and can't for the life of me figure out why I stopped.

I WILL paint the miniatures I've been meaning to paint! (Rippers anyone?)
I WILL put all the arms and legs back on my Rubric Squads! (Maybe my dice rolls will improve)
I WILL turn more things into Chaos Spawn! (any chaplains out there?)
I WILL get a character of mine in WoW past 26th level!
I WILL go to some gaming conventions!
I WILL romp merrily though a plethora of RPG universes... Curse my dice rolls though many a miniature game... fixate over more CCG's...(this is the "crack" I was referring to previously... cough cough) Experience the delights of these new fangled "Next Gen" Console Systems... Boot my computer for more then just email... Have more wood for sheep... Bang! more people in jail... Build more castles... Fix more starships... Race more robots... Toss more dice... Flip more Cards... Move more pieces... more... more... MORE!!!

I WILL tell all of yous about it!

A year from now I should once again be a denizen of Gameland.
Posted by The Game Babe at 9:08 PM 10 comments: 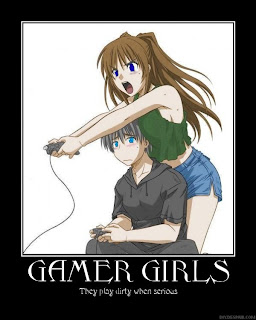 Here we go.  Taking the plunge into blogdom.
Step number one - Make blog!
Step number two - Start writing a post on the blog!
Step number three - Decide that Trebuchet is the most appropriate font to post in!
Why?  Because we fucking love trebuchets.
Seriously though, this is a blog about The Game Babe and Painting Munky's adventures in their geek life.  We plan on posting about many of our interests (and possibly complaining about things that aren't in our interest... why the hell not).
We love gaming.  Miniature, board, card, video, computer and more.  We love crafting in many different mediums and we plan on sharing these loves with you whether you care or not... but hopefully you care and share some of our interests and aren't just wasting your time hate-reading this.
Either way, thanks for taking the time to peek at our blog!  We hope you find it fun and informative and interesting enough to frequent. :D
Posted by Painting Munky at 9:51 PM 12 comments: